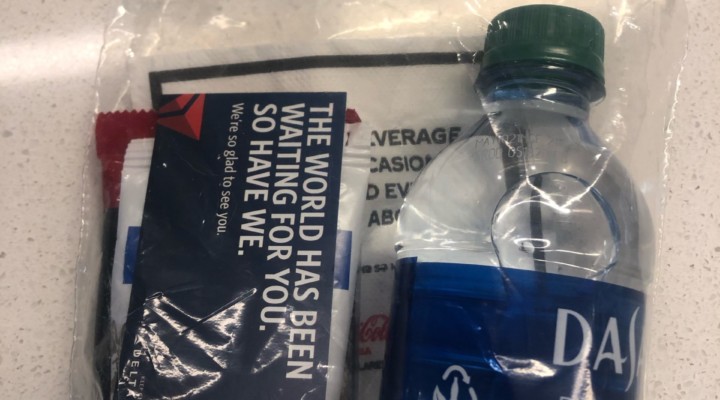 It’s June 15th and I am traveling for the first time in 3 months. The weekend leading up to this trip, I did some quick searches and realized I had a bit of anxiety over what my experience would be like. If you know me, you know that I don’t’ deal well with not having any food when I’m hungry (read: hangry) and so I knew some planning would need to happen to handle a 7am flight with a 4 hour layover. (It’s worth mentioning I’m flying into a VERY small airport, although layovers were never 4 hours prior to quarantine) so I’m in for a long day. My questions are – What’s open early? What’s available at the airport if the lounges aren’t open? What can I get on the plane?  What should/can I bring with me? Nothing is the same, and the only thing I was sure of was that I would need a mask and that the airport probably wouldn’t be as busy as I’m used to.

I thought it might be helpful to those considering getting back to their travel plans, if I blogged a little bit about my experience.

First – if it makes you nervous to be out and around others that are not wearing a mask, then you might want to stay home a bit longer. I’m talking to many of you with more serious illnesses, those that are immune compromised, and those taking care of vulnerable loved ones.  I live in Cincinnati and the CVG airport this morning hosted a number of people who chose not to wear their masks until they were forced to on the airplane. I can speak to the fact that everyone did a nice job of keeping their distance from each other, but if you need others to have a mask on for you to feel comfortable, then I just want you to know it was definitely the exception and not the norm to be wearing masks.

Rock-star Parking and the Airport experience

I know more flights are being added in July, but for the moment, I enjoyed rock star parking in the parking garage and no wait at all in the TSA pre-check line.  Fun fact, your expired drivers license is good 1 year from the date of expiration.  Lucky me, mine expired 3 weeks ago and this was something I researched prior to going to the airport. I brought my passport just in case, but I can confirm all they did was warn me that it was expired. I have mixed feelings about this…but grateful I didn’t have to fight the BMV line prior to my trip.

Once I was through TSA, I would’ve typically hit the Delta Sky Club. For those of you proud travel-card carrying lounge fanatics, both the Priority Pass club and the Delta Sky Club lounges are temporarily closed at CVG.  In Atlanta, there are still a few open, you’ll just need to pay attention to which ones. I would imagine it’s hit or miss everywhere right now, so do your research in advance.

Since the lounges at CVG were closed, I had it in my head that I would just hit Starbucks, no big deal. Well, they were closed too! Darn.  Chic-fil-A was closed as well (this was beneficial to not being tempted to cheat on the nutrition plan I’ve worked so hard on during quarantine), and the only thing available at 6am was McDonalds (with a lengthy line) and Bruggers Bagels.  I picked up a coffee at BB and a water, since I had been reading that food was not going to be available on many airlines and I was relatively sure that would also impact beverage service.

Smooth so far, I sat and waited for my flight at the gate and enjoyed the unusual ability to find a seat and not have to sit too close to anyone else.

We were all required to wear masks in order to board the flight and we were handed Purell wipes as we boarded. Magically all those people waiting that didn’t have masks on, suddenly pulled them out of pockets and bags in order to board the flight.  Delta mentioned that they had extras if anyone had forgotten theirs. They also announced that flight attendants were not allowed to help you load your luggage into the overhead bin. If you needed assistance, you were required to check your luggage. Last, they let us know the flight was 60% full.

The next big change was that Delta is loading from the back forward instead of by status. Granted, I enjoy my sky priority status thanks to flying so often, but it actually does make sense to let the folks in the back get on first.  It might be the first flight I’ve been on when I haven’t been wacked with a backpack or purse as people shuffle through the narrow isle to get to the back.

The first bit of chaos happened during boarding when someone was seated in the wrong place. It seemed like the ticketing system notified the staff before the couple boarded, as they were not permitted to board until it was fully resolved.

Once we (smoothly) boarded, there were plenty of places for carry-ons, which was expected, but still pretty nice to not have anyone shuffling my stuff around in order for them to wedge their supersized carry on into a small space.

During the flight, the attendants were not in the isle much. They came through once to hand us a packet (see picture) – we received water and a couple of snacks, and another Purell packet.

Once we landed, it was pleasant to deplane without everyone cramming themselves into the isle. Everyone spaced out, took their time, and kept their distance. If only it could stay this way!

My 4 hour layover in Atlanta was uneventful. One of the Delta Sky Clubs that was still open was actually right next to my gate so that was nice (although with 4 hours there would’ve been plenty of time to head anywhere I needed to go).  It was packed when I arrived before 9am, but by noon things had really cleared out.

There was still food available in the lounge, however everything served was packaged. Cereal was served in individual packaging, hard boiled eggs came in those large dressing containers, and in general the food was more limited than usual.  No worries, the bar was still open and coffee readily available!

My second flight was similar to the first, with the exception that I managed to get an upgrade to comfort +. So, good news, the upgrades are still happening if you have status. Both flights held up Delta’s standards for consistency and their promise to help you have a safe (and sanitized) flight. I don’t have anything else to share, as it was uneventful as one can hope during a day of flying.

This is a lengthy post, so I’m going to wrap this up quickly. Since I came back to this post during my trip, I’ve since seen some other articles about how they weren’t forced to wear a mask on other airlines and how everything was business as usual. You might call me a diva, but even in normal times I stick to the airlines I trust and I’m loyal to Delta. Right now, I’m even more happy to fly Delta because I can trust their standards, all the way down to the HEPA filters and the flight attendants with their matching purple gloves. Taking care of the details matters now more than ever.  If you’re going to travel during these challenging times, do it with the companies you trust to uphold the standards you need to feel safe. I hope my ramblings have been helpful to you as you venture back out into the world. Travel safe and stay well!

One thought on “Traveling Post-Covid-19 Quarantine”